Cannabis Stocks Are Blazing: Experts Weigh In On Whether Or Not To Take A Hit

Financial advisers are always telling people to invest in the things that they care about. And for many of us, one of those things is that lovely little green, munchie inducing herb: cannabis.

If you’ve been keeping up with investment news in the past couple years, you would know that cannabis has been lighting up on the stock market. In 2017, legal marijuana accounted for $8.5 billion in sales and is estimated to grow to $23.4 billion in 2022 according to a report by Arcview Market Research and BDS Analysis.

And with the recent legalization of recreational marijuana in Canada, the cannabis industry is looking to grow even further.

Before you call your financial adviser, put down the reefer and try to familiarize yourself with this very popular, yet volatile sector.

How is cannabis fairing in the market?

In the past year, cannabis stocks have gone through a rapid growth spurt. AJ Herrington, a cannabis expert who has covered the market for High Times and The Hemp Mag, has been monitoring and reporting on the cannabis investing scene since its fledgling days.

“There are opportunities for considerable profits in the industry,” Herrington told The Money Manual. “Stock prices and profits should continue to rise for well-positioned companies.” 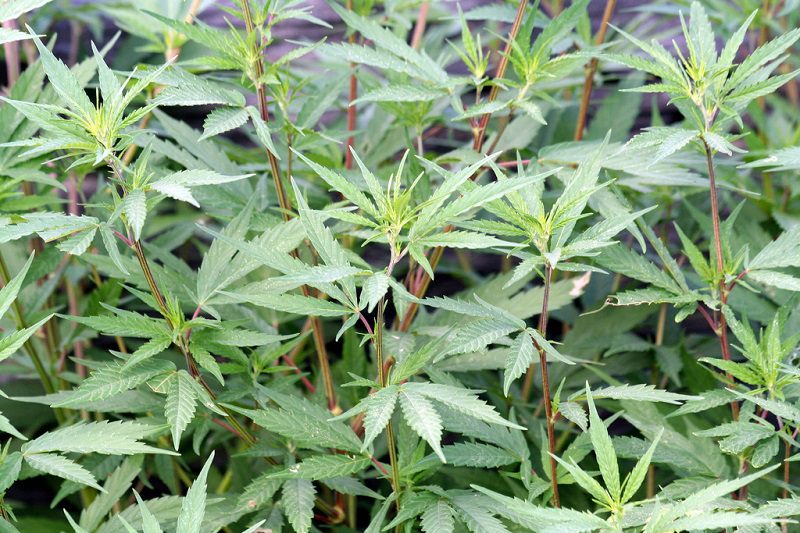 Some of the largest and most profitable cannabis companies are based in Canada. Companies like Canopy Growth Corp. (CGC) , Aurora Cannabis (ACBFF), and GW Pharmaceuticals (GWPRF) are worth billions of dollars and are the industry leaders.

Each company has made highly strategic moves to increase their capital and make themselves unique. The largest company, Canopy Growth Corp. owns seven farming facilities across British Columbia and recently the Constellation Brands (STZ) spirits company took a 9.9% stake in Canopy worth $190 million. For the past three months, Canopy shares have been up by 67%, which is largely credited to their partnership with Constellation Brands.

Another massive cannabis brand is Aurora Cannabis which will soon join Canopy on the New York Stock Exchange. Aurora is growing at a rapid pace and acquired CanniMed Therapeutics Inc. in January 2017, an acquisition worth $852 million. Also of note was the rumor that Aurora was in negotiations with Coca Cola to produce cannabis beverages (this rumor was later debunked after Coca-Cola which released a statement saying they would only be interested in creating non-psychoactive cannabis infused drinks).

Another big player is the British company GW Pharmaceuticals which has made the majority of its capital by developing and marketing cannabinoid-based drugs. Recently their drug Epidiolex, which treats two rare forms of childhood-onset epileptic seizures, was approved by the FDA to be sold in the United States.

Even though the United States encounters many legal restrictions that often cap the growth of cannabis businesses, medical cannabis companies like Aphria Inc. (APHQF) and Cara Therapeutics (CARA) have found their way.

“The market there [Canada] will be huge and there is great potential for growth,” Herrington told us. “Many Canadian companies have what what they see as the inevitable legalization of cannabis in the U.S. factored into their business plans, and will be ready to head south when the regulatory environment is right.”

Is investing in cannabis risky?

Many big marijuana stocks are in what financial advisers call nosebleed territory and it is likely that there is nowhere further for the stocks to go. Such big name companies as Tilray (TLRY), Cronos (CRON), and even Canopy may be worth a lot on the market right now, but the combination of their inflated market price and excessive spending almost guarantees their stocks are going to flat-line or fall. The story of the Tilray stock highlights this point as Tilray stock jumped by 12.5% then fell by 11% over the course of a single week in September. Just as with the dot com boom and Bitcoin, many cannabis stocks are riding a very large bubble that many experts believe could pop. 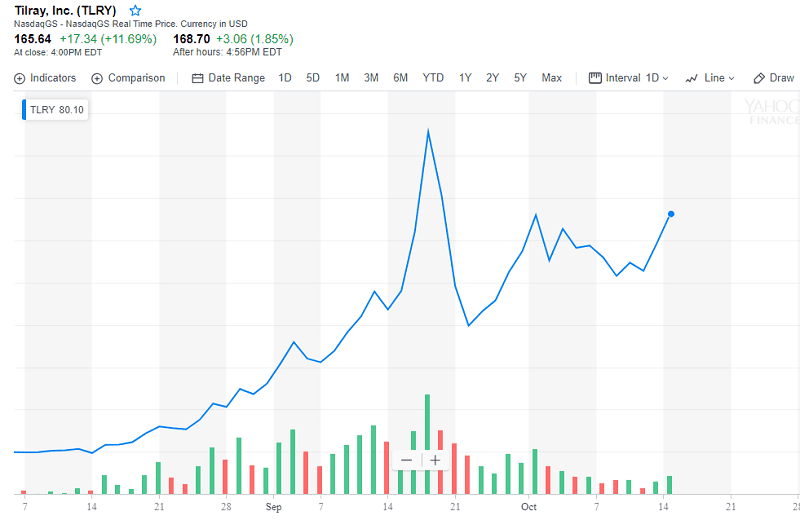 “I just can’t justify buying stock in what is essentially a high input cost farming operation with restricted sales channels that isn’t allowed by law to market itself, that’s worth $8 billion and earns $10 million per quarter in sales alongside a $90 million loss. Call me crazy, but that doesn’t sound attractive to me,” Parry told The Money Manual.

The restricted sales channels that Parry is referring to are the laws that restrict the sale and use of marijuana. The myriad of laws and regulations concerning all cannabis products is a mind-numbing minefield of legal problems.

Cannabis after all, doesn’t simply refer to recreational marijuana. Cannabis also includes hemp, CBD, and medical marijuana as well. And each of these various products confronts different levels of restriction and regulation. The more regulations a product faces, the greater risk the product has on the stock market.

Marijuana is obviously the most well known product in the cannabis family and the one that is up against the greatest regulation and risk. In the United States, only 31 states have made medical marijuana legal, nine states have made recreational marijuana legal, and on the federal level marijuana is still illegal. No matter if it’s for medical or recreational use, the use, growth, and production of cannabis is still illegal and can be cracked down by the government at any time.

And further exasperating the topsy-turvy legal world of cannabis is the issue of finding adequate capital.  Producers of cannabis have minimal banking access and thus don’t have the funds to handle expansion or potential legal battles that they might face.

Even in Canada where marijuana will soon be legal, the new legal marketplace of weed will mean a great deal of volatility before a solid relationship with financial institutions is established and new legal regulations are normalized. Just as Canada has legalized marijuana for adult use, big name stocks like Tilray, Canopy, and Cronos fell.  There are many legal and supply based kinks to be rolled out before Canada’s legal cannabis industry becomes profitable.

The president and founder of Thorium Wealth Management, Peter Huminski rarely sees an opportunity to advise his clients to invest in cannabis.

“Investing in cannabis stocks is extremely volatile, “ Huminski told The Money Manual. “There are many regulatory, tax, and policy hurdles that need to be overcome at both the federal and state levels before the cannabis industry is a mainstream business. It also may never happen.”

A company can fail at the tip of a hat, no matter if the cause is a legal conundrum with the federal government or a shortage of funds to match demand.  One day your investment in a California based cannabis production company could be flying and the next day the company could be shut down resulting in huge losses.

It is particularly important to think about diversification when adding cannabis stocks to your portfolio. Diversification, as any financial adviser will tell you, is very important for the stability of your investment portfolio. And if your portfolio is just made up of marijuana production companies or just made up of Canadian companies, then if that sector begins to fall then so does your entire investment portfolio.

“It is important to diversify across many companies since there will be a high failure rate among cannabis companies due to all the potential roadblocks and hurdles that still exist for the burgeoning industry,” Huminski told us.

So should you even invest in marijuana?

While the cannabis market is turbulent, there are several sectors of the cannabis industry that have proved to be stable over the past couple years, and profitable.

“Ancillary companies can be a good option in the U.S. where cannabis is still illegal under federal law,” Herrington shared. “Many people in the industry make the analogy to the California Gold Rush, when fortunes were made by those selling picks and shovels while many miners lost everything.”

More profit might come from investing in a company that deals with marijuana production and distribution indirectly. For example, a company like Kush Bottles (KSHB) which sells packaging, containers, and other ancillary products for the cannabis industry as a whole, is a safer option. Or a company like AmeriCann Inc. (ACAN) would be another good option to consider. AmeriCann designs, develops, and leases facilities for cannabis cultivation and production. Meanwhile, Scott’s Miracle Gro. (SMG) a marketer of lawn and garden care companies, owns General Hydroponics and Sunlight Supply, both of which are companies that produce cannabis growing supplies. 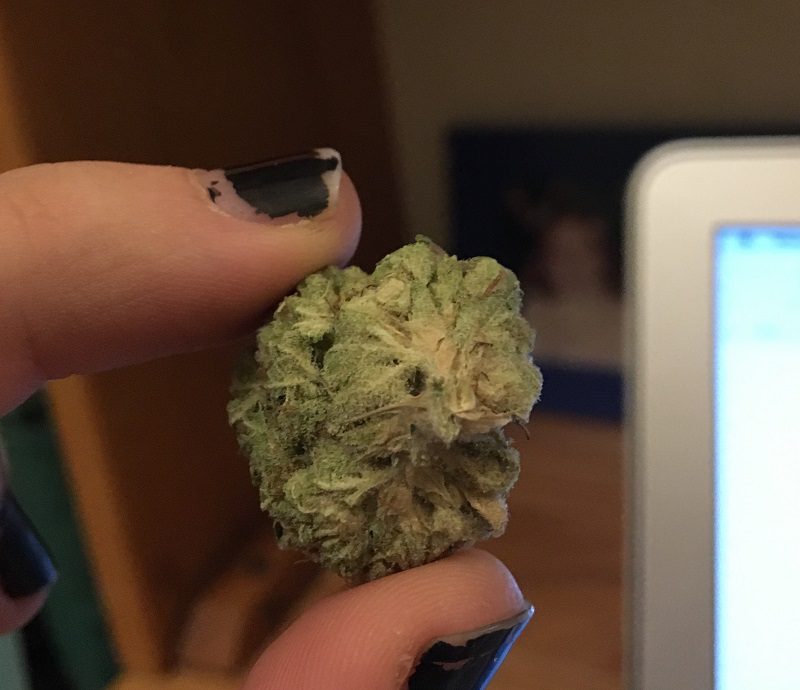 Cannabis is more than marijuana

Another option for investing is to turn away from marijuana entirely and look into two other products within Cannabis: hemp and CBD. Hemp and CBD come from the same cannabis plant, however hemp is used for skincare, paper, and clothing products while CBD is used to treat medical conditions such as anxiety, depression, Alzheimer’s disease, Parkinson’s, and more. As the Washington Post says, CBD is “the new it drug.”

And because CBD doesn’t have any of the psychoactive ingredients that marijuana does, it faces fewer legal restrictions. Industrial hemp and all of its products, which includes HBD, is legal in 40 states, and the new Farm Bill of 2018 would move to make the Hemp industry completely legal on the federal level.

It’s no surprise then that a recent report by the Brightfield Group predicts that hemp-derived CBD will lead the cannabis industry by 2022 and grow by 40 times its current size–an estimated $22 billion by 2022. And just this year the CBD market his nearly $591 million. Not too shabby for hippie oil.

The company that has been dominating the hemp market is Hemp Inc. (HEMP). And given the stock’s relative stability, investors believe it has a strong potential to lead the hemp industry as it begins its rapid expansion plans.

In short, anyone can invest in cannabis. If you are interested in it or you think that the market shows great potential, then go with your gut and try out one of the stocks or invest in an ETF. That being said, make sure your portfolio is diversified enough, and that its not not the bulk of your portfolio.

The next step is then to decide what kind of investor you are: high risk or low risk. If you are a high risk investor then investing in stocks that directly produce marijuana would be your best option while a lower risk would be to choose well established companies that might relate to hemp, CBD, or marijuana ancillaries rather than straight marijuana production.

Parry advises that the main thing you need to ask when selecting a cannabis company to invest in is if the company is doing something unique. The unique companies are the ones that will rise above the competition and consistently bring authentic value to the stock market.

“Get yourself a technology sales channel that would allow CBD to be sold in water, energy drinks, nasal sprays, soda, bread, multivitamins, that uses cheap weed feed stock to create a value added product. I’m interested in that call,” said Parry.