These 3 Very Different People Experienced Financial Windfalls. Here’s What They Did With The Money 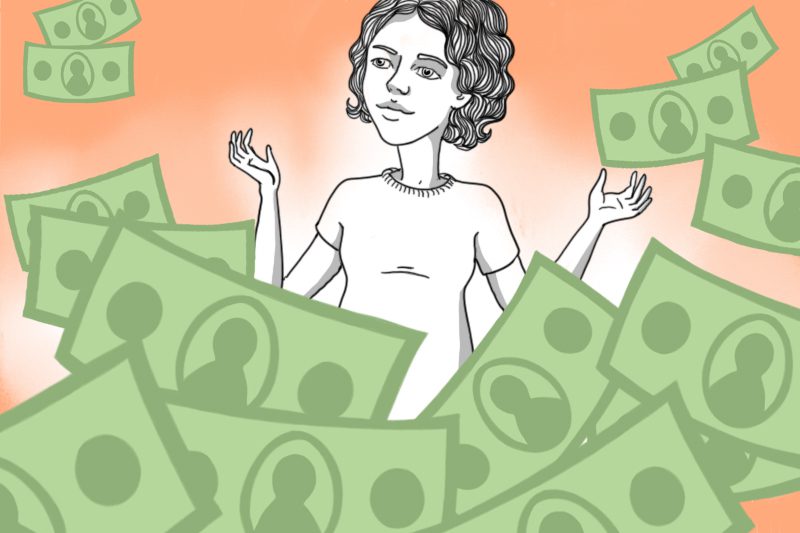 Ever imagine what you would do if you ended up winning the lottery? What about if you got a surprise inheritance from an estranged Great-Great Aunt? A book advance for more money than you ever imagined being able to deposit at once?

You often hear stories of large cash windfalls, but what happens next? Do people invest it, spend it wildly, buy that one thing they have been dying to own, since, forever?

We decided to find out. Here are three very different stories of people who experienced an unexpected financial windfall and what they ultimately did with the cash.

HOW: Winnings from a poker tournament

SPENT ON: Invested it

In April 2019, Taylor Kent, 26, of Scottsdale, Arizona was watching a few friends at a local casino play in a poker tournament. While he was at the casino, he made an out of character decision to sit down and play Three Card Poker himself.

After playing for about five minutes, he struck a Royal Flush which earned him an $82,000 payout. Not bad for starting with $200 at the table.

For those that enjoy gambling, the process of winning this amount of money is not as quick and easy as you might think. “The cash-out process took about an hour and a half, I had to sign two documents, one of which was for tax information that was immediately taken out,” Kent told The Money Manual. “They let me know taxes of 24% would be assessed as that is the amount the government takes on winnings. The pretax amount was a little over $82,000 and after taxes came out to $61,761.”

If you treat winnings as only fun money, you inevitably will not have any left. — Taylor Kent

After a few celebratory cocktails, Kent decided to hire a financial adviser to ensure that he handled the money correctly. His advice: “Put large sums of money in investments or into your savings account. If you treat winnings as only fun money, you inevitably will not have any left. Smart decision making is the key to success in business, in risks, and sometimes in bets.”

18 With A Lot Of Cash To Burn: Jacob Wade

HOW: Inherited money upon turning 18 along with an insurance settlement

Jacob Wade, 33, behind the blog iHeartBudgets came into a large sum of money at the very young age of four when his father passed away from cancer. His inheritance was put into an annuity to be paid out to Wade in payments starting when he turned 18.

Just before Wade turned 18, he was in a serious car accident. He was hospitalized and spent roughly three months recovering. During the recovery process, he settled with his insurance company to recover lost money for damages and future medical bills.

Because of that insurance payment and his inheritance, Wade found himself with close to $100,000 in the bank as an 18-year-old. In true teenage fashion, he decided to purchase a car, and put a ton of accessories in it including a stereo, subwoofers, speakers, a DVD player, black lights, rims, and more.

He then dabbled with community college and art school, which he paid tuition for. Next, he purchased his mom a car. He admits he also blew money on eating out, clothes, and other ancillary purchases. Before he knew it, all his money was gone.

If I knew the implications of having $100,000 at age 18, and the long-term freedom I could have experienced if I had invested it instead of blowing it, I would not have spent it all. — Jacob Wade

“If I knew the implications of having $100,000 at age 18, and the long-term freedom I could have experienced if I had invested it instead of blowing it, I would not have spent it all,” Wade told The Money Manual. “Now, I can’t say that my 18-year-old self was teachable enough for someone to have passed that knowledge along, but hopefully I would have been convinced by the value of owning a paid-for home, or heck, if I wanted, buying a used Toyota Supra for cash [instead of a more expensive car].”

Wade says his blog iHeartBudgets is a product of the financial missteps he took when he was younger. “I eventually ran out of money and had to move home and get a job. I then got engaged and had no idea where my money was going. I wanted to get my act together before getting married and knowing my poor track record with any amount of money, I listened to a Dave Ramsey’s audiobook, got on a budget, and the rest is history.”

His advice looking back on the experience? “You need to get on a budget, and set short and long-term goals right now, before you come across any unexpected money. That way, if you do inherit $50,000, you already know exactly where you want it to go: toward your goals.”

HOW: Inheritance from grandmother

Kelly Smith, 30, behind the blog Freedom In A Budget, based in Fort Lauderdale, Florida, similarly found herself with a large inheritance at a young age.

I decided to pay off all my debt and invest in my retirement and pretend that I never received it. — Kelly Smith

“When I was 16 years old my mother passed away from cancer and then two years ago my grandmother also passed away,” Smith told The Money Manual. “My grandmother had received a trust from her parents where she was receiving a set monthly amount from it. She was very private about her money and she never talked about it. After she passed, we found out that it had grown to over $1.2 million and since my mom was no longer here, my sister and I split her share of the inheritance. We received about $130,000 each. Once I received the inheritance, I tithed on it, paid off all of my debt (student loans), put $5,000 towards my honeymoon, set aside $15,000 in capital gains taxes and put the rest into my retirement. My sister bought a house with her portion but is still in debt because of student loans. I decided to pay off all of my debt and invest in my retirement and pretend that I never received it.”

While both Smith and her sister were placed in the same exact situation financially, their outcomes were totally different.

Brett Holzhauer is a graduate of the Walter Cronkite School of Journalism and Mass Communications at Arizona State University. He enjoys writing about personal finance, travel, and credit card rewards. In his spare time, he enjoys traveling with his wife, eating questionable Mexican food, and watching college football.