I am a twenty-something-year-old living in New York City and I generally consider myself to have pretty decent spending habits. After I pay for my essentials, every week I put $110 into my savings account. I do spend money going out on weekends, but I pay for my dance classes in bulk  (one of my bigger splurges), and usually buy my clothes at thrift stores. I pay off my credit card automatically every month and have been able to take short (usually long weekend) trips once or twice a year.

While I generally think I have my finances under control, I don’t really have a strong grasp of how much I am spending every week on random stuff — dinners out, transportation, random shopping outings– the stuff that really gets you. Which is what set me on the path of trying the viral No Spend Week challenge that has become a trend in the debt-free community as of late. The challenge is exactly what it sounds like: don’t spend money for an entire week; hopefully save a ton of money in the process.

Before my week even began, there were a couple of things that I needed to sort out.

What Exactly Is A No Spend Week?

I decided to opt for the second option (no spending except an allowance) because I wanted to budget for one Lyft ride for myself during the week.

How I Got Started

I wrote down goals for the week to help myself stay focused. The big goal for myself was to reset my spending habits and save some money.

I set some ground rules, too (otherwise I was just going to spend allllllll the money). I was going to purchase groceries before the week began and not spend money on food at all for the entire week after that. I planned on hanging out at friends’ apartments or my own instead of going out to eat or drink. And I would only spend money once throughout the whole week: taking a Lyft one night, a decision I made at the outset.

As far as the rest of my transportation, given that I live in New York City I was going to use the subway (I have a pass that I pre-pay for every month).

Some folks use a no spend app for their week but I preferred to budget with pen and paper. I felt more comfortable doing this than tracking myself with an app, but an app would probably work just as well. 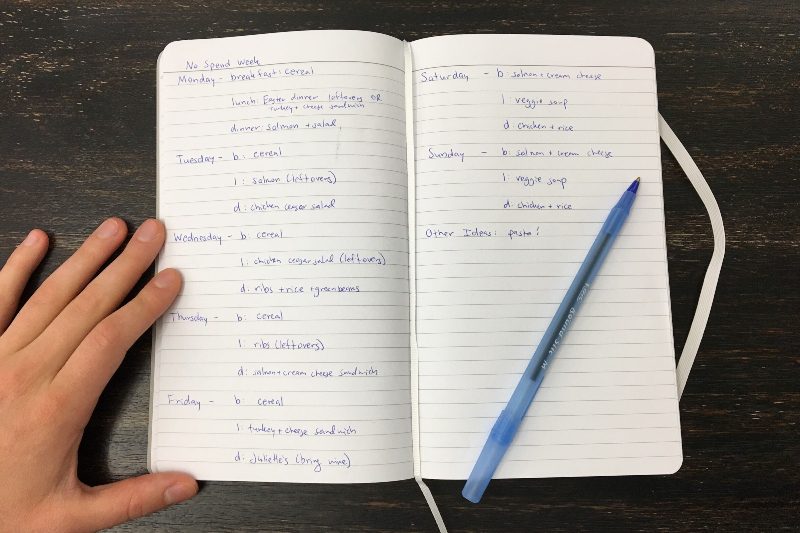 Along with keeping track of my budget, I decided to keep a list of things that I wanted to buy throughout the week (but couldn’t) adding to it as the week went along. 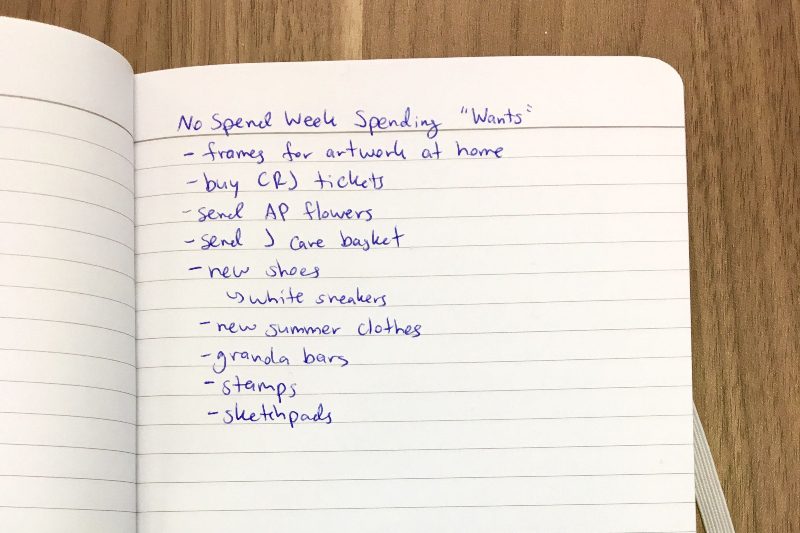 And so the week began:

Day 1: The Art Show And Saying Good-Bye To Expensive Lyfts

I ate breakfast at home, did some yoga, and then went to work with my lunch packed mentally ready to tackle the week. After work, I took the train to my friends’ art show. I stayed later than I anticipated and realized that I couldn’t just take a Lyft home (which would have cost around $35 including tip). I asked folks still there if any of them knew the best route for me to take home or if they were walking to the train. Wonderfully, friends and friends of friends came to my aid right away and helped me plan out my route and then agreed to walk with me to the train. One friend of a friend decided to take the train with me (“I also hate walking alone late at night!” she said) and we all wandered to the train together (#grrrlpower). It was a great reminder to myself that sometimes you need to ask for help. And often when you ask for assistance of any kind it can result in something becoming easier or better. I ate a quick dinner at home and then fell asleep. It was a great start to this week and best of all? I didn’t spend an unplanned cent. 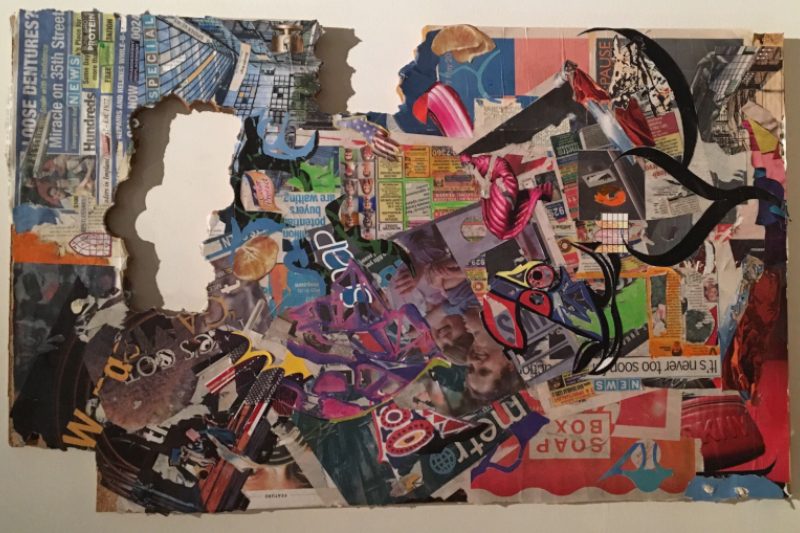 Went to work with my lunch in hand (if I had bought it, which I usually do three times a week, it would have cost me around $15). It was a super delicious salmon salad that my partner made (luckily he’s a phenomenal cook). Later that day I did yoga at home with my partner (which was hilarious) and afterwards, we ate dinner together. It wasn’t a hard day to get through but it still felt strange to say to myself, “You can’t buy anything.” It’s a totally different mindset. 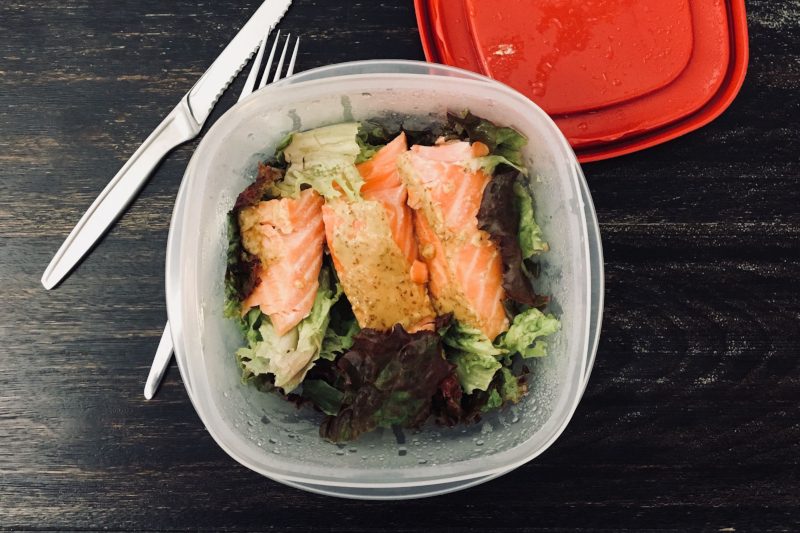 I didn’t have time to eat breakfast at home so I brought it with me to work (cheerios, raisins, and almond milk). Normally, I would have just grabbed a granola bar from my corner store ($3.75) but since I couldn’t spend any money, I decided to take five minutes and just make it for myself. I also brought lunch which was super yummy. I did yoga again at home, ate some dinner, and finally felt like I was finally getting the hang of ~not~ spending anything. 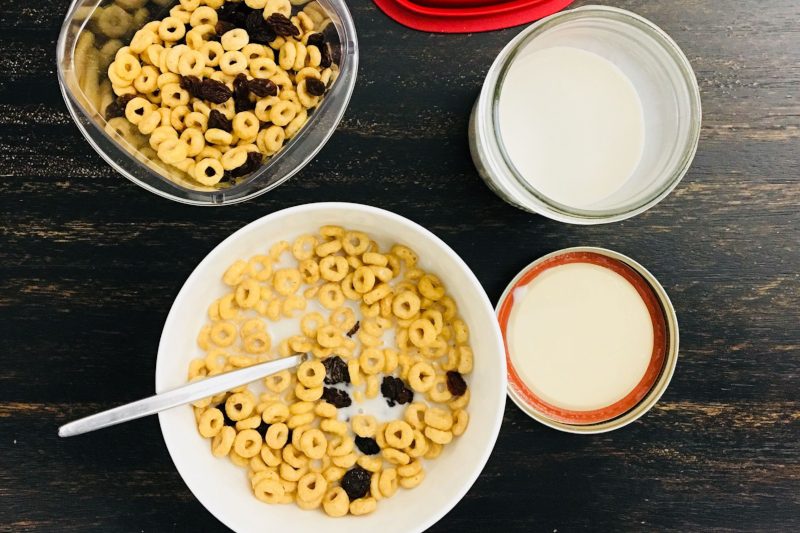 Day 4: Sunshine Over Shopping For Sundresses

I once again brought my lunch (saving me $15). One note about food: Even though my partner and I bought enough food for the week, we never made the food as we planned it out. I have no idea how people actually stick to their original meal plans or make meals in order.

I had a doctor’s appointment in the afternoon after work and afterwards, all I wanted to do was go clothes shopping (which I could have easily spent around $50 on). I actually hate clothes shopping (I am very petite, so it’s not that easy for me to find stuff) so this urge surprised me. Maybe not being allowed to shop at all made me want to shop? I have no idea. Regardless, I just walked past the clothing stores and enjoyed the (free) sunshine instead.

When I arrived home, I made myself a sandwich instead of ordering something for dinner (my partner and I probably order takeout for dinner at least twice a week). The dinners can really vary in price, but I am going to assume I saved around $60 eating in. When my partner and I go out, we will sometimes split the bill (especially if it’s really large) or one of just pays. When we order in, we usually rotate who pays or Venmo the other person for their half of the order. The $60 is assuming I would have paid for both of our orders. 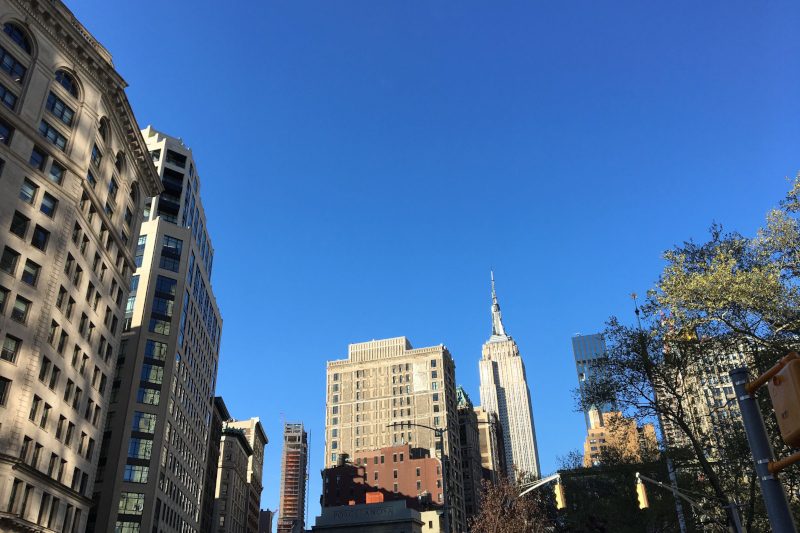 It was raining when I walked out of my apartment in the morning, and I realized immediately that I forgot my umbrella. My initial thought was, “Oh, well I’ll just buy another one,” but then I quickly remembered that I couldn’t just do that. I went back up to my apartment to grab the umbrella I already owned (saving me the $10 I would have spent buying a new one). I went to work with my lunch packed and my breakfast in hand (saving me $15 for lunch and $3.75 for breakfast). I didn’t have time in the morning to eat at home, so I ate my breakfast in the kitchen at work. After work, I headed over to a friend’s house by train (it took me two trains to get there #whywhywhy). My partner met me at the apartment bringing food and wine. We all cooked and ate and drank together as the night continued on.

This was definitely the hardest day to not spend money. I am not sure if it had to do with the gloomy weather but all I wanted to do was curl up in a coffee shop with a warm mug of (purchased) hot chocolate. Can you blame me? 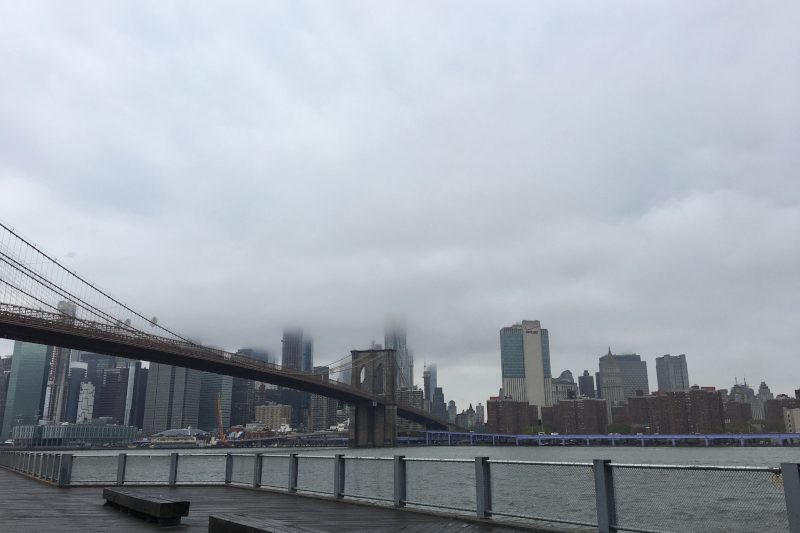 Day 6: I’m Turning Into A Homebody

On Saturday, I woke up and hung out with my partner all morning. I did some more yoga and cleaned my apartment and then watched some TV. I noticed that I was staying home way more than usual, but it was nice to clean and tidy up instead of going out. I cooked with my partner and waited for a friend to show up for dinner. We all ate our food (puttanesca, a delicious pasta dish) and sat around on the couch drinking wine and talking for hours.

Money saved: $60 (on average how much I spend when I eat and drink out with a friend)

I was so excited to be finished! I cleaned the apartment, did some more yoga, and planned out the week for food. Naturally, on the last day, I realized that this was getting easier and easier and that it would be weird to spend money again.

All in, I saved $327.50 over the course of the week. No money for a week really forced me to look at exactly what I spend money on. I would 1,0000% recommend this to anyone who is starting their debt journey or starting to budget for the first time or just wants to save a lot of money quickly. Also, if there is one thing this week really taught me, it’s that planning and preparation are everything when it comes to saving money. These are habits that I hope stick with me.

To hear more about my #NoSpendWeek listen to Episode Three of our Let’s Talk About Debt podcast.