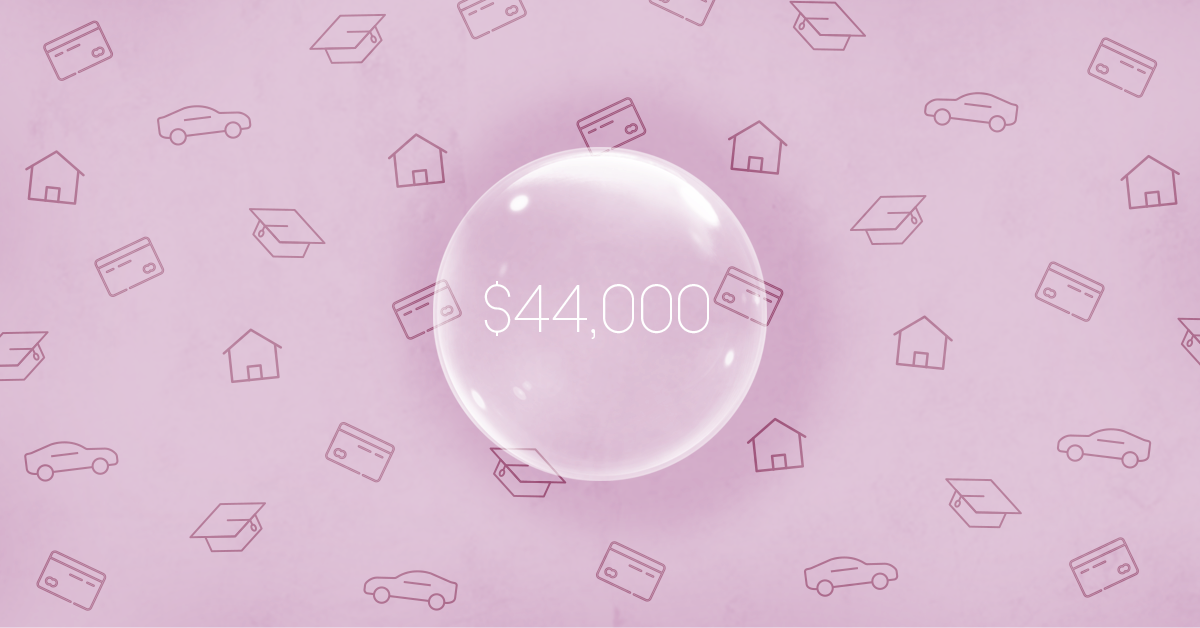 25-year-old Madalyn Gray is a self-described shopaholic. The Australian-based government worker said she spent years of thoughtlessly spending and amassed thousands of dollars of debt in the process. It felt like an insurmountable hurdle.

“I’ve had credit cards, I’ve had personal loans… adding it all up over the last five, six years, it’s added up quite a lot… I just had this compulsive urge to shop,” she told us.

I just had this compulsive urge to shop.

After marrying her now husband, she also took on the debt he owed only adding to her debt burden and bringing the couple’s total to a whopping $44,217.

“There were some really unfortunately circumstances that hit him [and caused him to be in debt] and mine was just poor choices,” Gray said of the position the couple found themselves in.

In January of last year she decided it was high time she tackle it.

Gray wondered how she could keep herself motivated as she began her quest to become debt free, so she jumped on Instagram and looked at the hashtags used by people who followed personal finance guru Dave Ramsey, who had been recommended to her by a friend. Before long, she stumbled onto the thriving debt free community online.

“The more I looked at it, the more involved I got and the more I just loved these people,” Gray shared. “I had finally found people who had the same thought process that I had.”

I had finally found people who had the same thought process that I had.

Conscious Shopping And A Side Hustle

Gray began to make a conscious effort to pay her debts down starting with being hyper aware of everything she was buying. She also took on a side hustle as a cashier at a supermarket to bring in extra income. Thanks to the addition of that side hustle to her income, she is now bringing in $68,000 after taxes altogether.

And she approached the debt starting with helping her husband pay off his debt first because he had shorter deadlines. As of now, the couple has $18,030 in debt remaining, meaning they are more than halfway to the finish line in just over a year.

Along with learning how to create a budget and stick with it, Gray stresses the importance of “rewarding yourself in the process” and warned against burn out.

“It’s really hard to see the big picture when you finish working a 60-hour week… and you just been on your feet and you’re ready to go to sleep and you think: ‘Why would I want to get up tomorrow morning?’”

The trick for Gray has been learning to not let her debt consume her. She still shops at the same places, for instance, she just makes an effort to be careful about how much she buys.

“You need to maintain some sort of lifestyle for yourself and make sure you enjoy your time because time on earth is so short,” she advises.

Why Isn’t This Taught In Schools?

A big question that Gray has had  going through this process is why wasn’t she taught more about handling money earlier in her life?

“It’s not taught in schools how to manage your finances, they don’t teach you how to do your taxes, nothing like that,” Gray shared. Maybe if it was, debt wouldn’t be such a huge issue.

It’s not taught in schools how to manage your finances, they don’t teach you how to do your taxes, nothing like that.

What to hear more about Gray’s debt journey? Check out Episode 1 of The Money Manual’s new podcast “Let’s Talk About Debt” to learn more about Gray’s story. You can also follow her on Instagram @debtfreeshopaholic_.