At first glance, it might seem impossible for someone like Tancy Campbell to climb her way out of $105,000 of debt. She’s a stay-at-home mom with two kids. Her husband is in the Navy. Not only does that mean the family is living on one salary and her husband is often deployed, but it has meant the family has moved a lot — five times over the course of 15 years.

But in a lot of ways, it was this story that led Campbell, now age 34, to want to tackle her debt to begin with. She knew that being a one-income household and having debt just wasn’t going to work in the long term. She couldn’t deal with the idea of debt hanging over her family. And so, her debt-free journey began. 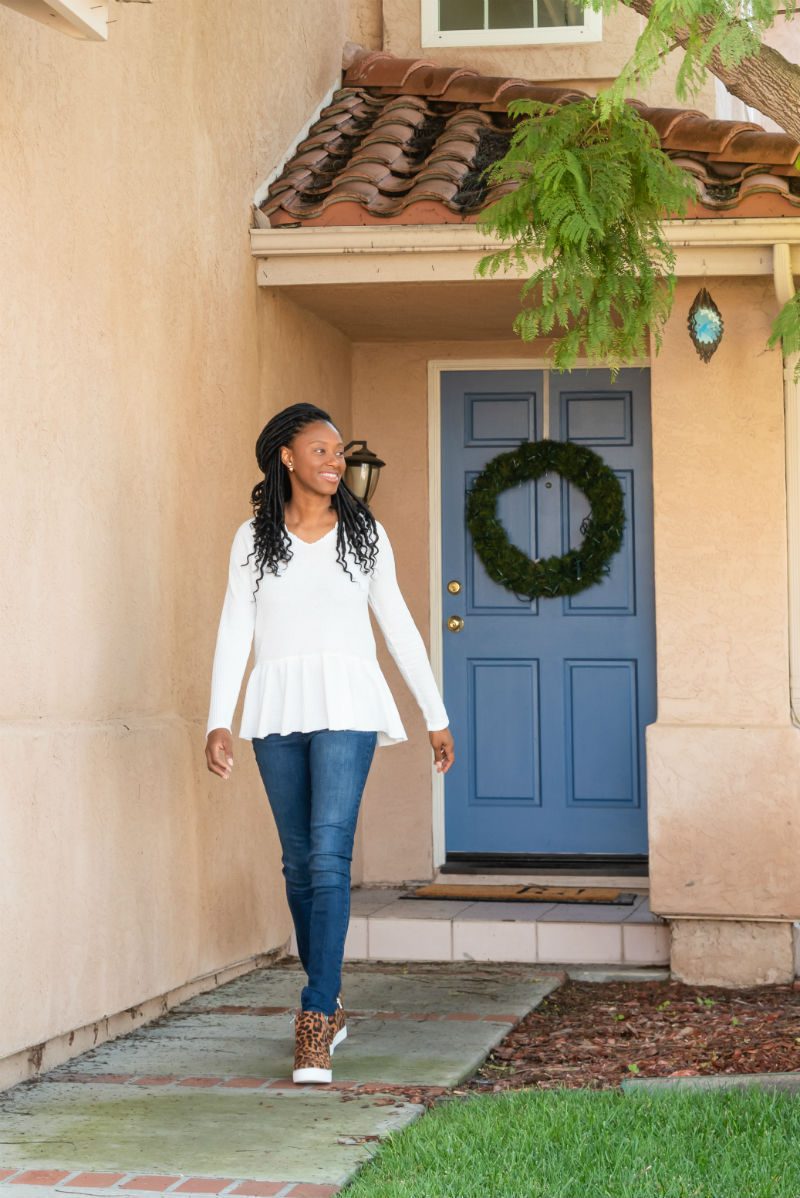 Paying Off Debt: Part One

“I was like oh, you know, ‘I’ll go to work in about six months’ and that kind of never happened… But the student loans keep gaining [interest] anyway.”

Once Campbell realized that she was going to be staying at home and her family was going to be living off of one income, she knew she had to find a way to pay off her debts. She read Dave Ramsey’s Total Money Makeover, and like so many people, found herself having an a-ha moment.

So, Campbell started tackling her student loans. Her husband at the time was making in the mid-five figures (including a monthly housing allowance) and Campbell was doing subsitute teaching as a side hustle. She paid off her undergraduate degree first, then her graduate degree, and finally paid off the family car last. She had, as Dave Ramsey likes to say, “gazelle intensity.”

So how exactly did she do it?

Campbell says she had a very small food budget and kept all her other fixed expenses to an absolute minimum. Her biggest struggle was, and still is, eating out. She was incredibly bare-bones and rigorous.

Still, it wasn’t easy for a host of reasons. Her husband was deployed twice that year. The family had moved from Memphis to Jacksonville, but they still had a rental property in Memphis which caused all sorts of problems.

“We had a water leak at our rental property so they had to redo the whole bathroom and then we had an electrical problem, a rat infestation, AC problems… our tenant’s wife died… this was all in one year…so that was the first part of that year and then I got pregnant [with my second child].”

That same year, Campbell also got into a car accident, and had her car stolen for several days (the very one she was paying off), and while it was returned to her, it was pretty beaten up.

“I was completely frustrated.”

Still, she able to pay off everything in 28 months, just two months after her second child was born. It should have been a time to celebrate, but Campbell admits that’s when “the struggles began.” To get out of debt had taken every bit of effort Campbell had to muster, but her husband wasn’t that involved since he was deployed during most of this. She had paid off a massive amount of debt, but her debt-free journey wasn’t over.

As soon as Campbell achieved debt freedom, her husband decided that he was going to purchase a new car and give his old car to his mother.

This is how we went from ‘Oh we paid off debt’ round one, to now we have more debt round two, and this was in a matter of two months so you can imagine my frustration.

“This is how we went from ‘Oh we paid off debt’ round one, to now we have more debt round two, and this was in a matter of two months so you can imagine my frustration,” Campbell shared. “I really didn’t have a leg to stand on because he… had not read the book, he had not been on the grind… he had not been in the trenches every single day.”

Campbell’s husband gave her a choice: either she could pick out a family car or he would pick out his dream car with all the “bells and whistles.” They decided to buy a brand new family car. Even though it was less expensive than what her husband originally wanted to purchase, it was still a brand new car.

“We had the car but I was done with the gazelle intensive,” she shared. “I was drained from that whole process and so I intentionally did not pay off debt any longer. I just kind of lived the life that I had lived prior.” Plus she says, her and her husband “were in two totally different places” as far as their thinking on debt during this period. She admits, she took a few years off, and didn’t worry about her debts too much.

Eventually though, she reached the point where she wanted to pay off the debt completely and “get this off of our backs.” So in 2018 she jumped back into her debt-free journey, bringing her husband along with her this time.

While her husband never read The Total Money Makeover and is still not the biggest fan of Dave Ramsey, he is now incorporated in the budget-making process.

Every time we pay off a bill, I’m like, ‘You’re going to color in these lines. You see how slow that’s going? Do you see?

“[His mentality in the past was] I’ll go to work and you just handle everything… because I’m a stay-at-home mom,” she shared. “Now I make him be a part of it. Every time there’s a budget, [I tell him] ‘You need to help with the budget.’ Every time we pay off a bill, I’m like, ‘You’re going to color in these lines. You see how slow that’s going? Do you see?'”

Sometimes Campbell’s husband still says he wants a brand new car. Her response? “I hope you got cash for it.” She’s learned to put her foot down for the good of the family. “We are not buying a brand new car. Not ever again.”

Campbell wants everyone to remember, it’s not just about getting out of debt, it’s about what you do after, too. “Yes, get out of debt but just continue to always be smart about your spending,” she cautions.

She encourages everyone, even people that are going through the debt-free process, to have other goals than simply becoming debt-free.

“Debt is not the end-all… always look at life outside of debt because a lot of my debt-free community friends when they do get debt-free, they’re like ‘I don’t know how to spend money… It’s harder to save money than it was to give it to debt.’ That sounds absolutely nuts but it’s like, ‘It’s my money now so why should I have to save it’… The day you become debt-free have another goal set in place.”

It took Campbell a couple of months following becoming debt-free, but she finally found her new goal: She is currently trying to save $100,000 for a home and she is going to begin working again next year when her youngest enters kindergarten. She is looking to becoming financially independent in the next 10 to 15 years so she doesn’t always have to keep working (she is a fan of the FIRE community). To do that, she plans to sock everything she makes away in a retirement account from that new job.

I think it’s important that women feel like they have something of their own.

“Women historically will work less and have a smaller retirement account…just because of child-rearing or having to take days off– just all the things that women have to deal with notoriously,” Campbell shared. “I think it’s important that women feel like they have something of their own.”

Campbell has started an Instagram account @HerWellSpentLife to share her story and offer advice to others, too. And she wants to go back to school for financial coaching.

“I dreamed of being a lot of things when I was a kid but I never knew that this would be my passion.”

Is debt an issue for you? Join our Facebook group “Let’s Talk About Debt” a community devoted to helping people get out of debt!