How I Discovered That Slowing Down Could Save Me Money 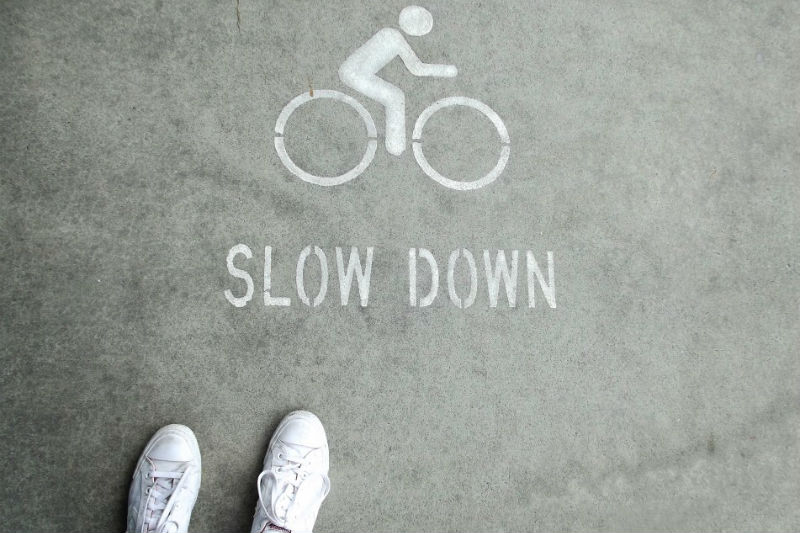 If you want to save money, you probably know to look for coupons, sales and deals. You know to say no to things you don’t need. But could slowing down actually save you money, too? In my experience, yes, because rushing has cost me a lot of money throughout my life.

About a decade ago, I was rushing to get to work and you know what I did without realizing? I drove straight through a stop sign. And I got hit and into a car accident, though it certainly was my fault.

So now instead of getting to work on time, I had to deal with police reports, insurance, tow trucks and freaking out about money. I had just started my first full-time job and wouldn’t be paid for weeks. My deductible was in the thousands. This was the first time in my young adult life that I had to tap my emergency fund. I was grateful to have it, but it was a costly situation that could have easily been avoided.

Always on the go, rushing has sometimes been second nature to me. But rushing to do things puts you at risk of injuring yourself. During one of my side hustles years ago, it was late at night and I was rushing to go somewhere, and no joke, I ran into a wall. I hit the wall and had a gash on my eyebrow. I wondered if I should go to the hospital and get stitches. Luckily, it ended up being okay.

Another time, I was riding my bike to work in the dead of winter in Portland, Oregon and the roads were icy. Rushing to work and going too fast, I fell off my bike and hurt my knee pretty badly. My knee was swollen for weeks, I ended up going to the doctor, getting an MRI, the works. I ended up being fine, but it cost me hundreds of dollars in X-rays and exams.

Most recently, I was rushing to make a salad so I got out the scissors to open the dressing packet. I missed a little and cut off the very top of my index finger. Let’s just say it wasn’t a pretty sight and I was anything but calm. It was agonizing and took over an hour just to get it into a manageable condition. I went to the doctor and went through band-aid after band-aid, tons of antibacterial cream. Not only that, but it was tough to write with a bandaged finger.

In all of these instances, I was rushing. Rushing to go somewhere, rushing to get to work, rushing to make a meal. I ended up hurting myself, which had physical and financial ramifications. If I just slowed down a bit, these things could have been avoided. On top of the actual costs, these things took a lot of my time too. Time is money and I spent much of my time putting out these mini fires that I created for myself by rushing.

When you rush your work you’re more prone to making mistakes. I’m no different. If I’m rushing through an article or rushing to do something for an event, I can forget important things that cost me later.

I end up creating more work for myself when I rush to get through something. There are mistakes I have to go back and fix. There are situations I agreed to, that ultimately weren’t wise for me financially, because I was rushing and didn’t read the fine print.

Rushing can lead to making more mistakes at work which could lead to more time fixing it later or worse, getting fired. You also might agree to do something for work, rush to say yes, and not really know what you’re getting yourself into.

I’ve been in situations where I’ve had to clean up my mistakes or I’ve taken on things I shouldn’t have, simply because I was rushing. This affected my bottom line in my business because I had to double down on work mistakes, instead of work on other income-producing ventures.

Aside from being a writer, I organize events. Oftentimes that means buying a lot of supplies, swag and other items to support the events. I’ve been in situations where I’ve had to pay more than double standard shipping prices because I’m ordering the items too late.

When you need items for a time-sensitive date, you must pay the price to make it happen. I’ve learned to think ahead and not rush through and wait to the last minute because I know it will cost me.

Slow down to save money

Rushing through life can put you at risk for injury, accidents, mistakes and more — all that comes with a financial price. Considering that most of these are preventable, it’s not fun to fork over hundreds or thousands of dollars.

That’s hard-earned money that could be used for your savings, investments or even a vacay. On top of the hard numbers, all of these things cost you a lot of time. Time that you could be spending making more money, time you could spend with yourself or time just to have to yourself.

If there’s one thing I’ve learned over the years is to slow down. It will be ok. The world won’t end if I go at my own pace.